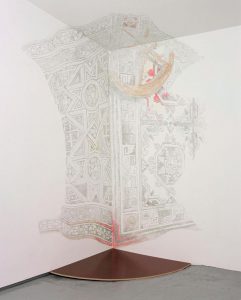 The work of BC-born, Berlin-based artist Shannon Bool is rife with oppositions. Whether it’s in a collision of cultural legacies and social realities or in the material contrasts between what is seen and unseen, Bool’s intricately wrought and subtly coded sculptures, paintings, photograms and video works lend fresh perspective to the aesthetic hierarchies and hidden narratives of everyday life.

Bool’s work has, of late, come to much wider appreciation. As Sara Angel details in the upcoming Summer issue of Canadian Art, which hits newsstands nationwide on June 15, recent sales to Charles Saatchi, showings at Art Basel, and inclusions in important German group shows—not to mention critically noted solo exhibitions with commercial dealers in Germany and Toronto—suggest that Bool has made significant inroads onto the international art radar.

Interestingly, Bool’s art-world success has come by sometimes taking on an outsider position—whether creating paintings on the unusual medium of silk, engaging so-called decorative forms like carpets, or working with communities of women prisoners housed in an ornamental 19th-century building in Berlin.

In the video Inside Job (2012–13), viewable by clicking on the Video icon above, Bool tracks the shifts between the utopian-leaning expression of a patterned wall mural completed in collaboration with female prisoners and the restricted movement—physical and psychological—determined by a modern institutional framework.

Bool’s silk paintings are equally polarizing. Collaged motifs that range from Greek mythology, art deco and 1980s fashion designs are painted and screenprinted on silk grounds, which are then loosely supported by large, transparent glass panes. The result is a picture window of sorts, offering a view through time and place that is at once deceptively delicate and densely layered, with a complex storyboard-like effect that turns on the illusive ideals of cultural progress.

As Angel observes in her in-depth profile, a major theme in Bool’s work is “the psychology of surface and how it can be used for emotional effect.”