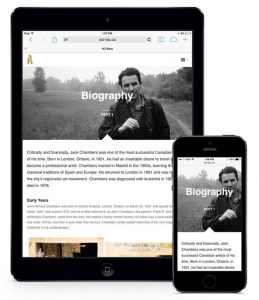 Adjectives like “indefatigable” are made for people like Sara Angel. A publisher, Trudeau doctoral scholar and active arts journalist (who has contributed to Canadian Art, in addition to the Walrus, Maclean’s, the Globe and Mail and others), Angel recently spoke to me at University of Toronto’s Massey College about her ambitious new project, the Art Canada Institute (ACI), which launches this Thursday evening at the college. It’s nothing less than a comprehensive, multi-tiered, online-based resource for the general public on Canadian art history.

The first two ACI initiatives are a website and a series of accessibly written e-books by prominent Canadian-art scholars on must-know Canadian artists. The first e-book is Jack Chambers by U of T professor Mark Cheetham; forthcoming titles, many to be rolled out over the next year, include William Notman by Sarah Parsons of York University and Paul-Émile Borduas by François-Marc Gagnon of Concordia University. Immediately striking is the project’s clean design, developed by the Toronto-based Concrete Design Communications, and, in tandem, the lucidity of information presented. Each book, roughly 15,000 to 17,000 words and overseen by editorial director Meg Taylor, is organized into identical chapter categories, such as “biography,” “key works” and “styles and techniques.” All are easily navigable and digestible. Designers of digital kiosks at museums should take note.

Indeed, if the ACI grows as Angel intends, we will have a large virtual museum consolidating Canadian art history at one URL. All content on the site, including each e-book, is bilingual and free.

Angel points to her experience in publishing and volunteer fundraising as main instigators of this dream project. “The art book is deeply ingrained in my psyche,” she says. “My parents were booksellers [owners of Edwards Books & Art on Queen West and other sites in Toronto] so I grew up in bookstores, and I always knew there wasn’t a consistent quality of amazing books on Canadian artists out there. It wasn’t because people didn’t want it; it was just the economics of making a book in Canada work—you have to print, like, 20,000 copies in order that your price isn’t crazy high.”

Angel later worked at Phaidon in London and noted how ingrained the visual arts were to a cultural education in Europe, as well as how lacking they were here. More recently in 2010, on beginning her PhD—about the impact of print media on Modernism, a moment she thinks is being replicated now in the digital age—she visited Jack Chambers’s archive at the Art Gallery of Ontario, and she felt strongly that it (and things like it) should be more accessible. She began putting out feelers, raising the interest of prominent people including John Fraser, master of Massey College (who was effusive, although could offer no funds), and a host of Canada’s leading art-historical academics, such as Cheetham, who jumped on board as the ACI’s first commissioning editor. Eventually, in 2012, Angel put her Trudeau Doctoral Scholarship towards the ACI and kicked planning into high gear—but really, the last three years have constituted an extensive series of asks.

“It’s totally amazing,” she says. “People were like, ‘Why doesn’t this exist?’ I think it’s that everybody, academics and museum professionals included, are realizing that an online presence is, in fact, maybe even more important than any other presence you can have. The Art Canada Institute was able to give a very respectable, authoritative way to enter into that world.”

The scope of the ACI demanded significant funds in addition to the Trudeau monies, and Angel, who describes herself as “a pretty good salesperson” and has raised funds for various nonprofits as a volunteer, had no one turn her down—from the private sector, at least. BMO Financial Group, Aimia and TD Bank Group are among the corporate sponsors for the e-books. Angel is careful in discussing why she thinks she couldn’t get the backing of bodies like Canadian Heritage; it’s clear she hasn’t given up yet. She concedes that a small percentage of e-book funds (“less than two per cent of my entire budget”) came from a Social Sciences and Humanities Research Council grant Cheetham received for translation, and adds that “paying a going rate for translation is really expensive, so I would think that someone like Canadian Heritage would support it. I’m still hopeful.” (All other contributors to the projects agreed, Angel claims, to work for standard-industry or “friends and family” rates.)

The launch of the ACI’s website and e-book series is just the start. Forthcoming: print monographs; virtual exhibitions assembled by leading curators; the ACI Massey Art Lectures on Canadian art history; apps; and secondary-school outreach programs. Why isn’t the National Gallery of Canada or another major Canadian art institution doing this? That’s an ill-aimed question, notes Angel: being an outside organization with a not-for-profit status helps her skirt the collection biases of those institutions, or the steep fees that might be incurred if lenders of images knew they were dealing with larger entities.

“We have only one mandate: Canadian art-history research, education and promotion,” says Angel. “It’s redefining the conversation about Canadian art history for a 21st-century audience.”