by James Adams, The Globe and Mail 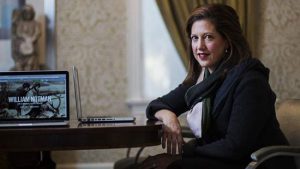 The idea for the Art Canada Institute, a bilingual, not-for-profit organization dedicated to the dissemination and promotion of Canadian art history “to as broad an audience as possible,” didn’t come as a sudden revelation, but rather as the result of an accumulation of “several moments of inspiration.”

So says its creator, Sara Angel who, though only 44, has been a significant presence in Canadian book publishing, magazines, arts journalism and worthy-cause fundraising for at least the last 15 years. Angel will be the host on Nov. 28 when the ACI launches its first major initiative, the Canadian Online Art Book Project. Set in Massey College at the University of Toronto, the launch event heralds the publication of Jack Chambers, a critical biography of the late London, Ont., painter – and the first of what are expected to be dozens of digital texts on significant Canuck artists, art movements, art themes and issues. Each text, to be written by an academic or expert, will run to 15,000 words and include as many as 60 illustrations. And they’re all going to be free, readable online or downloadable as e-books.

“It is about redefining the conversation about Canadian art history for the 21st century, using 21st-century means,” declares Angel, who’s serving as ACI executive director and publisher of the art-book project.

Angel’s been working up to ACI’s realization for years. Currently a fourth-year PhD candidate in art history at the University of Toronto, she’s long been perturbed by the lack of “a consistent body of information, either in print or online, that addresses the most important topics in Canadian art history for research and education.” While there are several fine books, at once accessible and authoritative, on, say, Tom Thomson, the Group of Seven and Emily Carr, other important but less famous names, such as Mungo Martin, Maud Lewis and Henri Julien, have not enjoyed that treatment, not least because of the onerous economics of publishing art books.

A major “turning point” for Angel occurred about 10 years ago as she was doing research for historian Charlotte Gray on what became The Museum Called Canada: 25 Rooms of Wonder. “That project took me to archives across the country and I realized how much visual culture was in museum vaults and storage, inaccessible to Canadians,” she says. Doing Gray’s book served as an impetus for a return to university to take an MA in art history, “with the intention of making visual culture more accessible.”

Another moment occurred in 2007, while doing that MA: visiting the Jack Chambers archive at the Art Gallery of Ontario. Angel “realized first-hand … how little [information] of substance was available on his art. There was literally nothing on the web.”

In 2010, she visited the office of John Fraser, the well-connected master of Massey College, to see what he thought of her idea for the creation of a multifaceted art institute and to bat around fundraising schemes. “‘You’ve got to do this at Massey,’” she recalls Fraser saying. “‘This is Vincent Massey’s dream. … It’s his vision of the coming together of town and gown.’” (Massey, Canada’s first native-born Governor-General, founded the college that bears his name in 1962.)

Enthusiastic as he was, Fraser had no money to give her. However, he did have office facilities, fundraising expertise, an enviable Rolodex and “a great address.” He also agreed she could use his name as the institute’s chair.

Angel spent the next 18 months building support, knocking on the Ottawa doors of the Department of Canadian Heritage and the Canada Council for the Arts, laying the infrastructure for the ACI. But it was only in May 2012, after Angel was named a prestigious Trudeau Doctoral Scholar and awarded a grant of $60,000 over each of three years, that she had the financial wherewithal to start to make the ACI a reality.

Since then, she has assembled a blue-ribbon board of directors, an institute advisory committee, a book project advisory committee, a commissioning editor and a roster of some 40 contributing writers. ACI obtained charitable status earlier this year, and while Angel has yet to receive any public money, her private fundraising has started to produce results. “A year ago at this time, I had not raised one penny,” she says, but now, after receiving seed money from Bank of Montreal, “I have $500,000 in pledges over the next five years.”

ACI expects to publish at least 12 online books on individual artists between now and the spring of 2015. Besides the Chambers book, written by U of T professor Mark Cheetham, there are planned texts on the familiar – Paul-Émile Borduas, Michael Snow, Joyce Wieland and Emily Carr – and some not-so-familiar names – B.C. carver Mungo Martin, the pioneering 19th-century photographer William Notman, early modernist and Group of Seven contemporary Kathleen Munn. Also in the works are books on Nova Scotia folk artist Maud Lewis and Quebecois caricaturist/illustrator Henri Julien.

At the same time, online publications aren’t the only arrow in the ACI’s quiver. Angel intends to birth a variety of other programs between now and the end of the decade. The first, the ACI Massey Art Lectures will be just that, a variation on the famous CBC Massey Lectures, but with a focus on topics that “tie Canadian art history to contemporary issues,” Angel says. This should start in 2015 with an inaugural presentation, it’s hoped, by Steven Loft, a Trudeau Doctoral Scholar at Toronto’s Ryerson University and the recently appointed co-ordinator of the Canada Council’s Aboriginal Arts Office. Other future ACI projects include online art exhibitions curated by museum and gallery professionals, the creation of content for secondary-school art courses, and the development of art apps for mobile devices. “The idea,” Angel explains, “is to roll out a different program every year.”

In short, no one is going to be able to accuse Angel and company of thinking small. “Europeans have a really strong familiarity with their cultural heritage,” Angel notes. “Now we have this technology – the Internet – that can help that familiarization here. This just needs to take place.”