A Gallery of One’s Own: Art Toronto’s Panel on Women in the Arts 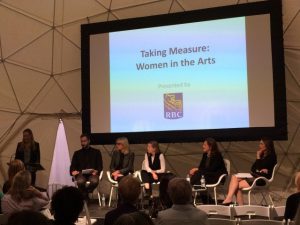 When famed feminist art historian and professor Linda Nochlin first asked in a 1971 essay printed in ARTnews magazine, Why Have There Been No Great Women Artists?, she wrote of the institutional barriers faced by women artists and took to task the perpetuation of patriarchal structures in the art world.

Nochlin’s question was revisited during Art Toronto’s Speaker Series panel this past weekend, titled Taking Measure: Women in the Arts.

The panel brought together women curators, auctioneers, and academics, in order to discuss and dissect the current state of women in the arts; the only thing missing from the women in the arts panel was a working woman artist.

Instead, there was ample discussion about the role of corporate responsibility in arts promotion. Panelist Robin Anthony, curator of RBC’s more than 4,000-work corporate collection, spoke about the corporation’s commitment in supporting and promoting emerging artists through various projects and foundations. One of these, the RBC Canadian Painting Competition, awards the winner of 15 finalists a $25,000 prize, while adding works by the top three finalists to the bank’s collection.

One of this year’s finalists is 24-year-old Claire Scherzinger, also in the audience for the weekend’s panel. Despite being chosen as a finalist, Scherzinger was aware of the gender disparities at play in the art world.

“I understand and see the differences,” she said. “I have to work twice as hard as my male colleagues.”

According to the panel, six to 12 per cent of artists working in Canada between 1968 and 1975 were women. Since then, the number has risen to a still-meagre 20 per cent.

Despite the increase, panelist Sara Angel noted that there is a big difference between the representation and participation of women artists and used the example of the AGO as a Canadian art institution that should do more to promote and exhibit women artists.

“From 2003 to 2011, the AGO held nine solo male exhibitions and only two of them were living female artists, why is that?” asked Angel.

While the numbers are bleak, panelist Christy Thompson, chief of exhibitions and collections at the AGO, expressed optimism, and that public institutions can play a positive role.

“Because public art institutions are not worried about filling a quota or selling the art, they can take the risk and show more work by women artists,” said Thompson.

This begs the question, why in 2015 is showing the work of female artists considered to be risky business?

The discussion did not delve into the economical, ideological, or patriarchal underpinnings of why there was such a disparity between male and female artists in the market. And there wasn’t any criticism of the hegemony of the market itself, or the struggles women artists go through while trying to navigate that market. When asked why a male moderator was leading a panel discussion on women in the arts, RBC’s Robin Anthony responded, “We didn’t want it to look too skewed or that we were being somehow exclusive of men.”