The Art of Seeing

Toronto artist Luis Jacob’s new retrospective asks “Why do we look at pictures?”
—

While preparing for his new retrospective, “Pictures at an Exhibition,” (now on at the Museum of Contemporary Canadian Art) Toronto artist Luis Jacob stumbled upon a photo of himself using both hands to hold his right eye wide open.

The image is an homage to Salvador Dalí and Luis Buñuel’s 1929 classic surrealist film, Un Chien Andalou, in which a razor slices through a woman’s eye. The photo was shot over 20 years ago, says Jacob, “by a friend while we were playing around in the school cafeteria.” Used by MOCCA on a banner for the show at the front of the gallery, the provocative picture foreshadows why Jacob has become a rising international art star.

“Luis is unusually gifted at shedding light on other artists’ works at the same time as underscoring the intellectual depth, trajectory and scope of his own work,” explains curator Barbara Fischer, who has worked with Jacob on many occasions.

Jacob’s handsome, boyish looks make him seem way too young to be having a mid-career show. But in two decades, the 39-year-old has accomplished more than most artists do in a lifetime.

Since the early ’90s, his innovative practice has included painting, drawing, collage, photography, video, sculpture and installation. He has also curated exhibits, written art theory and worked as an activist for causes including community education projects and the queer community police-watchdog group, June 13th Committee. Jacob’s style and output is so diverse that, as he explains, people could easily mistake the show “for a group exhibition of different artists’ work.”

However, a common theme runs through virtually everything Jacob creates. According to MOCCA curator and artistic director David Liss, Jacob’s practice is “built upon historical traditions, from 19th-century museological and exhibition display, to 20th-century abstraction, minimalism, conceptualism, collage and even design, music and dance.”

In 2007, this multi-faceted focus helped Jacob earn the chance to participate in “documenta 12,” the über-prestigous, invite-only exhibition of the world’s most important contemporary art, held once every five years in Kassel, Germany. Since then, his conceptually driven work has been on the radar of the world’s top tastemakers. But, unlike so much idea-driven art these days, Jacob’s output is never hermetic—a key reason why he was the unanimous choice of the City of Toronto’s selection committee to make art for the new Queen-Dufferin Street underpass, to be unveiled in fall 2011.

“Pictures at an Exhibition” offers a unique insight into the world of Jacob and his exceptional practice. Much more than a survey of one artist, the exhibition features a typically wide range of Jacob’s work, as well as an exhibition within the exhibition that he has curated, which includes stand-out pieces by such art greats as Jenny Holzer, Dan Flavin and General Idea.

Collectively, these components explore the question, why do we look at pictures? “Why, in other words,” asks Jacob, “do we turn to fictions in order to understand the truth?” The answer to this question lies in the artist’s teenage nod to Dalí and Buñuel, his first work in a career-long study of the eye—its nature, power and ability to perceive. 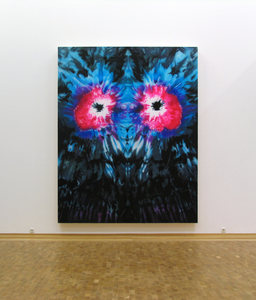 Luis Jacob, They Sleep With One Eye Open, 2008. Acrylic on canvas.

This painting, made in reference to the abstract expressionist painter Mark Rothko—who is

known for his blurred, soft-edged squares of colour—is one of a series of seven large canvases that Jacob made in 2008. He created the work after asking himself: what if a painting came alive? “I realized that [such a] painting has to look at you the way that you’re looking at it,” he says. 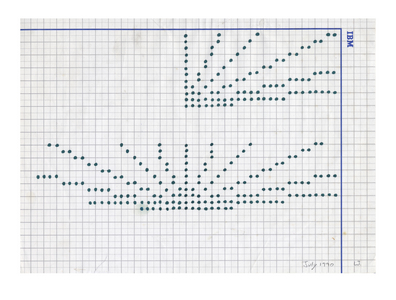 Permanent marker on printer paper. Jacob made this early work while taking a class in Christian literature at the University of Toronto. His assignment was to write about entering heaven. Rather than producing an essay, Jacob created a book of drawings and text based on a 19th-century etching of radiant sunbeams cutting through the clouds. “I ended up creating an artist’s book of absurdist permutations of the heavens,” he says. It wasn’t what Jacob’s professor expected, but the course changed his life. “I began to identify myself as an artist.”

Raised in: Scarborough, Ontario, where his family moved when he was 10

Education: BA (in philosophy and semiotics), University of Toronto, 1996

Known for: his broad, cutting-edge practice and his generous art activism

How others describe him: “Luis radiates positivity. He genuinely believes in the importance of art, cares about the world, and believes that it can be a better place.”—David Liss, Artistic Director and Curator, MOCCA

In his own words: “We make art to leave ourselves objects that speak of the way we saw the world at a certain time.”