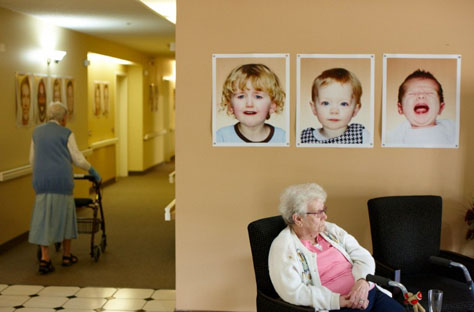 There’s An App for That: Sandy Nicholson’s Multimedia Project “0 to 100”

Celebrated Toronto photographer Sandy Nicholson has never been one for following conventions. But when he took pictures for his recent “0 to 100” project, he was surprised by how many of his own expectations he surpassed. His mesmerizing images chronicle subjects who range in age from 0 to 100, to illustrate how our looks change with each passing year. And they can be viewed in one of three ways—as an iPad app, in a brilliantly designed book and at an exhibition. Collectively, these three formats forecast the future of published images and anticipate a time when we’ll all be looking at art through apps.

The “0 to 100” exhibition is currently on display at the Kingsway Arms at Aurora Retirement Centre, a venue that’s a far cry from the site of the show’s initial run earlier this year, Queen and Ossington’s Angell Gallery. But it’s a key part of the project’s story, which began last July when Nicholson teamed up with a few Toronto firms looking to collaborate and try out new technologies. Print manufacturer Specialties Graphics had a new binding process that allowed books to lie completely flat, while branding/design company Up Inc. had been asked by Adobe to be a beta tester for iPad app-making software.

Nicholson was keen on the creative potential of working collectively. When the team came up with the plan to document people’s faces, they agreed to create an exhibition, a book and an app.

0 to 100 i Pad App Demo Short from Sandy Nicholson on Vimeo.

Using Facebook and a casting agent, the collaborators put out a call to friends and family. They quickly found three 100-year-olds, but other age groups—like men in their late 80s and 90s—proved harder. “There just aren’t that many alive,” says Nicholson. It was also difficult for them to come to his studio where he shot most of his subjects with the same type of studio lighting. (“To show the wrinkles and lines on people’s faces, but without being harsh or mean.”) After Nicholson photographed each of his participants, he filmed them talking about their age.

0 to 100 Opening at Kingsway arms from Sandy Nicholson on Vimeo.

When a relative helped Nicholson find four nonagenarians at the Kingsway Arms, he broke his own rule about maintaining consistent studio conditions and brought his gear to the retirement home. Since those subjects couldn’t get downtown to the Angell Gallery premiere, Nicholson offered to stage the second showing of the exhibition there.

Being more of a “book person,” Nicholson was skeptical about his partners’ plan to make the “0 to 100” app. But that changed when he saw it. The app presented his pictures with stunningly clarity and immediacy, while offering fun accessories like “Face-maker,” a game that allows viewers to make mash-ups of his images. Nicholson also loved how a tap on the screen instantly allowed him to see his subjects talking about themselves: “You get a sense not just of what age looks like, but how it sounds and feels.”

Now a convert to the idea of looking at art via apps, Nicholson firmly believes we’re about to undergo a big change in the way we view museum-worthy images. He says it will happen “because of the app’s high-quality resolution, and because it costs less than making a book.”

That said, he argues that hard-copy content won’t disappear—a good thing since the 0 to 100 book is an artwork unto itself. Much like the coexistence of DVDs and theatrical movies, in the future, visual content will be delivered on a range of platforms.

This multimedia model has certainly been successful for Nicholson’s project. Since its March release, the 0 to 100 book—printed in a limited quantity—has become virtually impossible to find, and its app counterpart has been downloaded over 30,000 times. “I think it’s the future,” says Nicholson. “In fact, I don’t even know if there’s going to be any other choice.” 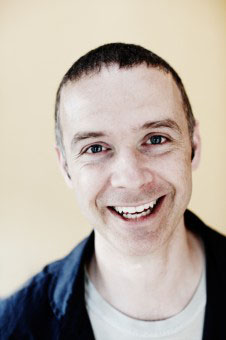 Exhibition history: National Portrait Gallery in London, the World Expo in Lisbon, Fotofeis in Scotland, the Museum of Contemporary Art in Sydney and World Press Photo