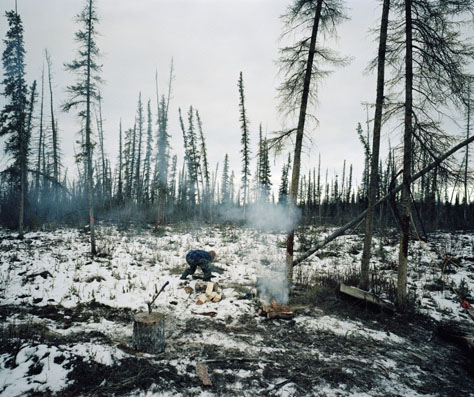 Out of the Woods

Eamon Mac Mahon shoots sublime scenes of the Canadian wilderness from above.
—

Growing up in Grande Cache, a remote coal-mining town in Northern Alberta, Eamon Mac Mahon fell in love with the forest “as a place for freedom and adventure.” He never imagined that some 20 years later, he’d find himself hanging out of a plane in an effort to share that passion with others.

“Aerial photographs weren’t something that I had planned [to do],” says Mac Mahon about Islands in the Woods, his new show at Bau-Xi Photo, which features large-scale images of the North, from the Canadian Shield to the Nahanni River in the Northwest Territories. “But they allowed me to get to know the country in a way I hadn’t imagined.”

The results are mesmerizing. Mac Mahon’s landscapes are a 21st-century take on mythologizing Canada through art—an idea first popularized by the Group of Seven in the 1920s. Almost every picture was taken from 50 to 500 feet above ground level; these are sublime visions of an uninhabited wilderness that few people will ever see.

Mac Mahon first became acquainted with the forest when he was a boy sitting in the back of his parents’ car during family vacations. “We had to drive for hours through the woods, to get from town to town,” he says. “The terrain looked forbidding, dense and scary from the outside. But inside the woods it was a soft, light, spacious and gentle place.”

In 2003, Mac Mahon had a chance to see the forest from a different vantage point. His best friend from high school, Steve, now a pilot in Sechelt, B.C., took the artist up for a ride in his two-seater 1946 Luscombe bush plane. “The aircraft was so old,” says Mac Mahon, “it ran on car fuel.”

The view was transformative. From above, Mac Mahon could see where the tree line ended and the landscape turned to tundra. “Every 100 miles or so there would be a pretty significant change,” he says. The artist was struck by how the endless acres of forest encircling open plains “seemed like oceans surrounding islands.” Soon mobile casino the two friends were making regular flights, but Mac Mahon rarely planned in advance what he would photograph. “Usually the pictures just happened,” he says.

Although he captured magnificent scenes, it took years for Mac Mahon to show his aerial works to anyone. “I do things and then I set them aside for a while,” he explains. And he hadn’t yet committed to any one geographic region. In addition to photographing Canada’s north, Mac Mahon was taking pictures in Europe and the United States. “I became a photographer to see the world,” he says. “I always thought I would keep moving around.”

But over the past six years, no matter where Mac Mahon travelled, he found himself back in his friend’s Luscombe plane every autumn, lured by the landscape he witnessed from above. Gradually, as he saw more of the world and Canada, Mac Mahon realized that his longing to document unadulterated wilderness could best besatisfied at home. “There’s so much land here that hasn’t been touched,” he says. “There are provinces where 80 per cent of the forest hasn’t been accessed.”

Another turning point came in 2007 when people started asking for large-format prints of Mac Mahon’s photographs. Until then, the artist hadn’t seriously considered printing oversized works because they’re costly to produce, and he didn’t have the money to experiment. Presented on an epic scale, Mac Mahon’s images had a powerful new impact. He won the Contact Festival Grand Prize in 2007. The following year, Photo District News named the artist one of the world’s most notable “30 under 30.”

Despite his success with aerial photographs, Islands in the Woods is likely to be Mac Mahon’s final exhibition of such pictures. After the Luscombe began to shake violently on one trip, Steve got rid of the plane. The timing, explains the artist, coincided with his desire to move on to new bodies of work.

Mac Mahon recently started shooting images underwater; he’s creating video installations to accompany live music. And although the artist says he continues to feel the draw of the Canadian North, it will be a while before he sits in a rickety plane again. When asked about how he’d like to make his next foray into the wilderness, Mac Mahon says, “I would really love to be able to walk to some of these places.”