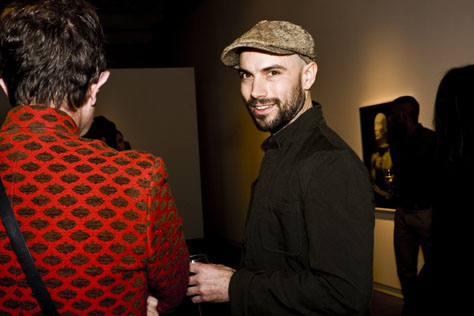 If there was any question that Chris Curreri is Toronto’s newest art star, the crowd at the opening of the 33-year-old’s solo show, “Beside Myself,” should erase any doubts. It’s a cool mid-November evening, and Bloordale’s just-opened is packed with a buzzing audience. As one guest knowingly explains, “The beautiful art and society ladies have come for the impossibly charming Faria, and all the cute, savvy gay boys for the amazingly talented Curreri.”

The rising photographer’s highly anticipated show couldn’t be better timed. Earlier this month, on the first night of the Toronto International Art Fair, the Art Gallery of Ontario bought Curreri’s photo triptych, A Model in a Sculptor’s Studio—one of only four works purchased by the institution at the event. That accolade came shortly after the young photographer received the Toronto Friends of the Visual Arts’ $10,000 Artist Prize, an award that calls attention to the best local talent.

“Beside Myself” features five black-and-white photographs (all made in 2011) of a bodybuilder’s nude upper body. The model’s musculature is so taut, smooth and inflexible that it appears to be a statue—an effect that is further enhanced by a delicate, textured cloth of dough that conceals his face in every image. 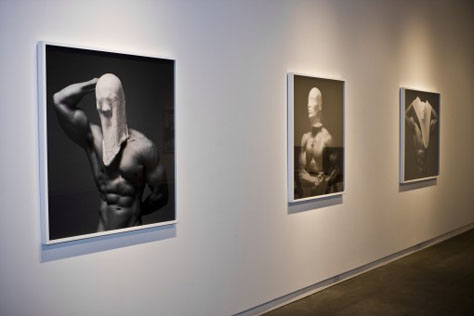 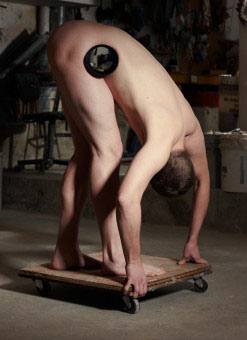 The idea for the series came to Curreri by chance after he saw a gag photo of a man who’d had pizza dough thrown on his face. “You could see his teeth through the dough,” says Curreri. “It looked like skin had grown over his orifices, making his features appear sculptural.”

Curreri’s been taking pictures since he was a student at North York’s Earl Haig Secondary School; he continued the practice at the Ontario College of Art and Design, then at Ryerson. Although his early work involved photographs, they weren’t ones he took himself. “He enlarged old family snapshots and then meticulously hand-stitched onto parts of the images, usually faces, to create compelling and eerie works,” says Sophie Hackett, assistant curator of photography at the AGO.

An MFA program at New York’s Bard College helped Curreri establish a direction that led to his current body of work. When one of his teachers instructed him to make a video, Curreri took an archival landscape image and punctured it with a pin. His film showed light moving through the photo’s surface—an effect, says Curreri, that transformed the image into a scene that “looked like L.A. at night.”

Back in Toronto, Curreri’s next step was to explore ways of transforming the human body by shooting a nude dancer in poses that pushed the boundaries of classic art stances. In a photograph from this series (purchased by the AGO), his model stands in an artist’s studio with his torso bent downward and wrapped around a wide hollow tube. The theme harkens back to Hellenic times, but the image is a world apart from classic sculptural ideals: The photograph, Curreri says, is of “a hole bored in a man.”

In “Beside Myself,” Curreri continues to re-work classic notions of the body and its presentation. But in this latest exhibition, he wanted to show the human form as a solid, hole-free mass. “I wanted it to be something perfectly constructed, yet grotesque,” Curreri says.

Judging by the enchanted visitors in Faria’s gallery who are transfixed by Curreri’s images, he has accomplished that goal. He’s also successfully updated an ancient artistic tradition. And whether they’re aware of it or not, Curreri’s audience is bearing witness to a new 21st-century take on the human body.

In his own words: “I am interested in the act of re-imagining something that is presumed to be fixed, and the way this act poses a challenge in the way one sees oneself.”

Inspirations: 19th-century Post-Impressionist sculptor Medardo Rosso; Robert Mapplethorpe (“I like that there’s an obscenity to his work that isn’t readily apparent”).

Collectors: The AGO, the Agnes Etherington Art Centre (Queens University) and the University of Toronto’s Hart House.

Next project: “I want to make a film that makes reference to Yoko Ono’s film Bottoms, in which a series of moving buttocks are shown in close-up.”