How an AGO intern solved a long-standing art mystery and helped launch an exhibition of an unknown master.
—

Sophie Hackett, the Art Gallery of Ontario’s assistant curator of photography, didn’t have high hopes when she asked her summer intern, Vanessa Fleet, to help her determine the creator of a collection of French photographs. “It’s the stuff of careers to figure out who did something, to answer the question, ‘Who created an unknown work of art?’” says Hackett. “It’s a dream to have somebody pin down an attribution.”

This makes the mystery that Fleet solved last summer, in under three months, all the more extraordinary. It is also one of the many good reasons to see the poignantly beautiful AGO exhibition opening this week, which sprung from Fleet’s find: “Where I Was Born…: A Photograph, a Clue, and the Discovery of Abel Boulineau.”

Last May, Fleet, a master’s student in the University of Toronto’s museum studies program, began to investigate a collection of 1,702 photographs that the AGO acquired in 2005 from an anonymous donor. For five years the photographs sat in the gallery’s vault, slipped into clear plastic album sleeves in 10 large burgundy storage binders, as Hackett and her colleagues ruminated about what to do with the pictures. From the moment Hackett first saw the collection’s “incredibly well-preserved” photographs of pre-industrial rural life in France from 1897 to 1916, she knew they were remarkable. But, she says, since the images were un-attributed, “more research and cataloguing had to be done before we could exhibit or publish them.”

Made during a time when European cities were becoming increasingly modernized, the photographs include a wide range of everyday subjects—children, animals, potters, people out for a Sunday stroll, local produce sales and espadrille makers. “They represent a time and place that we don’t see so much,” says Hackett. “Most turn-of-the-20th-century photographs tend to be city images and studio portraits—works that people paid to have made. There is little available of people photographed outside in an informal way.”

Hackett was also drawn to the collection because of the photographer’s talent and technique. “In each of these five- by-seven-inch pictures there’s a lot going on visually,” she says. “A great deal of information is corralled into them. Yet they really come together as gem-like compositions.”

Hackett asked Fleet to work on the collection because the student can read French, and had written an essay on French photographer Eugène Atget. “I knew she knew about France at the turn of the century,” says Hackett.

Fleet began her exploration of the works by carefully studying the photographs’ reverse sides. There, on many of them, always annotated in the same tiny handwriting, she found peoples’ names and often addresses, as well as the names of all the towns, landmarks, mountains, lakes and rivers that the photographer visited. “The collection is like a diary of the places he saw and the people he met over a 19-year period,” says Fleet.

On the back of one of the photographs—a shot of two women walking down a shady path—were words that struck Fleet: “Auberive–l’Avenue de l’Abbatiale–où je suis né, le 16 mars 1839” (“Auberive–Abbatiale Avenue, where I was born on March 16, 1839”). Not only did the phrase offer the name of a street, town and birthdate, it was a rare first-person inscription.

The first thing Fleet did with this information was to rule out a photographer named Émile Fréchon, who also took pictures of the French countryside and who some believed was the possible creator of the collection. Since he was born in 1848, he couldn’t have been its author.

Then Fleet contacted the French parish responsible for the records of Auberive and discovered that in 1839, on the 17th of March, there was a single entry regarding a birth the previous day. It was for a baby boy listed as “Boulineau, Abel-Marie Nicolas.”

Using Google, Fleet discovered that Abel Boulineau had been a recognized Paris-based painter, who taught art at one of the city’s well-known colleges and whose painting can be found online because his work is still traded at auctions.

Still, there was nothing to connect the name Abel Boulineau to photography, and no smoking gun to attach his name to the AGO collection.

Not until Fleet was nearing the end of her internship did she come upon a picture that made her stop in her tracks. While going through a final binder, she looked at an image of four women, surrounded by young children, washing clothes along a river in front of a laundry line. “It felt very familiar,” says Fleet, describing the moment when she realized that the photograph was almost identical to a painting by Boulineau called “The Washerwomen”—an image she had seen almost two months earlier on the web. 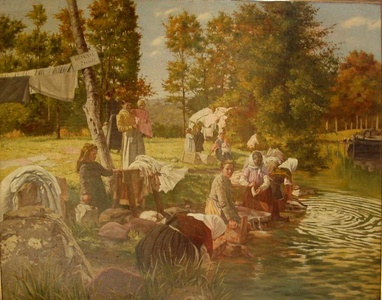 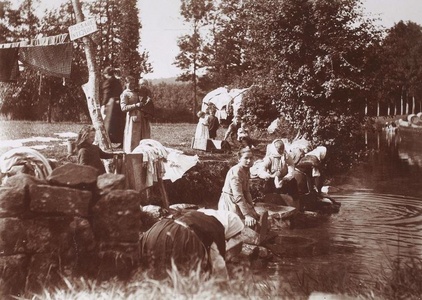 Dinan: Wash house on the Rance River (around 1898)

“It was pretty convincing,” says Hackett. “This was the final key that unlocked the mystery of the pictures’ attribution.”

Were it not for Fleet’s find, the collection would eventually have gone on show as a notable documentation of French country life. But Fleet’s research situates the images in an entirely new light. Boulineau can now be included as part of a group of 19th-century painters—including such greats as Edgar Degas—who turned to the new art form of photography to create source material for their paintings.

“It signals to me how much work there is still to be done in the history of photography,” says Hackett. She also acknowledges that with the right intern, “it’s clear what can get accomplished.”