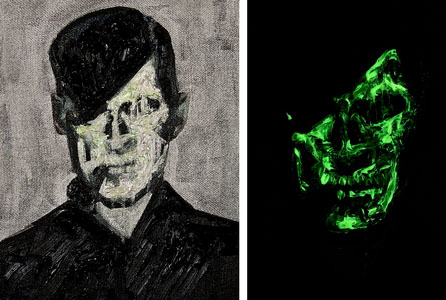 This past summer, Kim Dorland—one of Canada’s most talented and successful young artists—received the provocative sobriquet “extreme painter.”

The title was bestowed upon Dorland by his Montreal dealer, René Blouin, who was making an analogy to extreme sports. To draw attention to an artistic style emerging in cities including New York, Berlin, and Toronto, Blouin organized a Montreal festival, held at several galleries last July and August, to showcase the work of Dorland and other artists who pile paint on canvas with such bold physicality that their finished works give off an aura of aggression, heat and even violence.

According to Blouin, the extreme painting movement is a rebellion against dominant contemporary tastes that favour cerebral and often confounding works of new media “done under the influence of Photoshop”—in particular, photography and video art.

Dorland does indeed paint with intense and confident brushstrokes, but he has distanced himself from the school of extreme painting. In a recent Maclean’s interview, he explained that he doesn’t see himself as part of a movement in a traditional sense. With “Nocturne,” Dorland’s newly opened exhibition at the Angell Gallery, he proves his point.

In the gallery’s front window, Dorland has placed 100 copies of a single image set in a tight grid, much like Andy Warhol’s famous Campbell’s soup can silkscreened prints. The picture is a well-known black-and-white photograph of a bow-tied Tom Thomson, Canada’s legendary painter.

On his face, Dorland has modified the original image by superimposing a graffiti–inspired, fluorescent green skull, to haunting effect. This work of art, made on an iPad, flies in the face of extreme painting’s characterization as an anti-digital movement. It also gets to the heart of Dorland’s show and his painting lineage, which he identified as going back to Tom Thomson and “carrying the torch a little bit further.”

“Nocturne” is an homage to Thomson, the Owen Sound–born Group of Seven associate who radically transformed the notion of Canadian landscape painting between 1912—when he first visited Algonquin Park—and 1917, when he drowned mysteriously while paddling on Canoe Lake. Included in Dorland’s exhibition are several paintings of Thomson and various skulls; these are references to an event in 1956, when four men—after a few drinks too many—exhumed a skeleton believed by some to be that of Thomson. A hole found in the skull’s left temple fuelled rumours that the painter had been the subject of foul play, while heightening his iconic status.

Like Thomson, whose painting technique was radical for his day, Dorland pushes the limits of his medium. His artworks in “Nocturne” include depictions of rabbits, owls, trees and dark silhouetted figures; within layers of oil and acrylic paint they incorporate such elements as fur, feather, wood, glitter, strings, screws and glow-in-the-dark pigments. Dorland’s choice of materials gives his audience a heightened boreal experience—like a walk in moonlit woods, these works have the power to simultaneously enchant and startle, terrify and beguile. They delve deep into the national psyche and offer an invigorating new take on what it means to both live and paint in Canada today.

Audience outside Canada: Dorland shows in New York at the Mike Weiss Gallery, Los Angeles at the Mark Moore Gallery and in Milan at Bonelli Arte Contemporanea

Known for: both his suburban and wooded landscapes, taking risks by not repeating himself, and piling it on with paint

How others describe him: “This guy is a bad ass!”—Mike Weiss (Dorland’s New York dealer)

Big breakout moment: the 2006 Scope Miami art show when international collectors, curators and galleries took an interest in his work

Market value: Dorland’s landscapes sell for as much as $48,000, though his smaller works on paper can be bought for $2,000