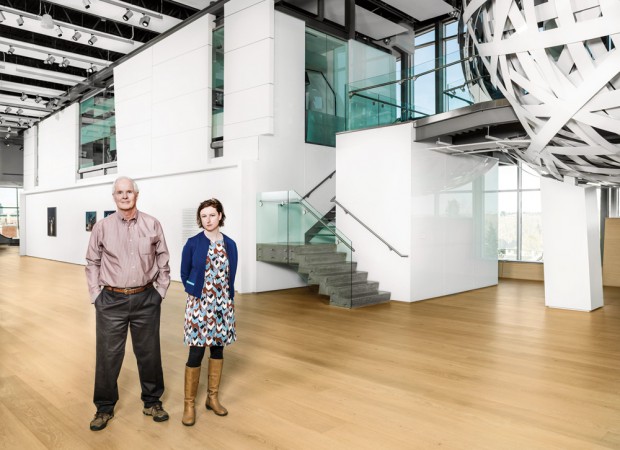 Art and Commerce Find Harmony at the Esker Foundation.
—

Calgary continues to be a boom town, with one of the highest rates of economic growth in the country, more millionaires per capita than anywhere else in Canada and unmatched opportunities for wildlife viewing. But, says Jim Hill, the 63-year-old president and founder of the Esker Foundation, “There was a desperate need for more quality visual-arts space here.”

For more than a decade, the city has wanted a modern-art institution—a 300,000-square-foot, stand-alone, brand-new gallery. “That hasn’t happened. And it’s not even close to happening,” says Hill, explaining how he came to spend $100 million creating the Atlantic Avenue Art Block in the forlorn Inglewood district, where he built a four-storey development whose top floor is Calgary’s most important new art space: a privately funded gallery that operates likes a public institution.

“Over the years, you have had a lot of people who have made a lot of money here,” says Hill. “But they have taken it to Palm Springs, or the Bahamas, or somewhere outside of Calgary.” In a city with a lot of really powerful business people, when it comes to art, “there’s a difficulty in making something happen. There’s a lot of circular, endless debate.”

While Calgary waited for this cultural hole to be filled, Hill decided to establish the Esker. “I don’t think I’m an A-personality,” he says. “But I’ve found it easier to build things without partners.” In the process, Hill has become a pioneer of an increasingly visible alternative to the country’s two dominant models for showing art: the public gallery system and the artist-run centre.

Since its inception, the Esker, which celebrated its second anniversary this June, has been about putting on shows that bring a broad audience into a conversation about art. With too many galleries, explains Hill, “You’re either on the train and understand what’s going on in the art world, or you’re left behind at the station and you don’t get it. There’s got to be a space where a wider segment of the population can be been invited into the art world.”

Hill grew up in Ontario, where he studied engineering at the University of Toronto before becoming an accountant. In the mid-1970s, newly married, he and his wife Susan relocated to Calgary, where he worked for Ernst and Young. Not long after, Hill’s work took the couple to Paris, where his attraction to art was seeded. “It was impossible not to notice it,” says Hill. His interest further flourished upon his return to Canada, when in 1980 Hill became CFO at Badger Drilling, a company that designed drilling chokes for the Canadian land-based market.

In 1987 Hill bought a subsidiary of the company, Pason Systems Corporation, with an objective to transform it into an international provider of data-management systems for drilling rigs. In the process, he worked with the software developer David Duffin, who is also the grandson of Walter J. Phillips, the renowned Canadian painter and printmaker who played a key role in the development of the Banff Centre’s art school.

“David really got me going,” says Hill, who spent nights working at Duffin’s farmhouse, which is packed with substantial colour-field paintings, including works by Jack Bush, Jules Olitski and Kenneth Noland.

Hill’s initial reaction to the art was, “What is this?” Then, one night, things changed. Focused on an Olitski hung behind Duffin’s head, he had a transformative moment. Like a puzzle that suddenly makes sense after staring at it long enough, all of a sudden the painting came “right off the wall, right between us, right in my face,” says Hill. “I thought, ‘Wow, I get it.’”

Soon after, Hill started buying art. He largely stuck to colour-field and Abstract Expressionist works (though today his collection has broadened and includes artists with strong connections to Calgary, such as Ron Moppett, Chris Cran, Ryan Sluggett and Evan Penny) and he travelled to Toronto and New York for it.Hill remembers one spring day when he walked out of the Metropolitan Museum of Art and into Central Park, where all the trees were in spring bloom. “It was like I was on drugs,” he recalls. Whereas he had never much noticed colour before, suddenly he was blown away: “The shades of green were infinite.”

To share his experience, Hill placed most of his collection on the walls at Pason. There, he explains, the art had a similar effect on his employees. “They really fed off it. They became quite creative in their own right.”

As Hill’s collection grew, so did his interest in contributing to Calgary’s cultural landscape. A newcomer to the art world, his plans came with a fresh way of thinking about how to create exhibition space. “Art and commerce have always existed together because you need commerce to buy art,” he explains. “But they don’t cohabit very easily.” Hill observed that if art spaces feel too commercial, they seem cheapened, while commercial buildings too often acquire art in a “token” kind of way, by placing one sculpture in front of a building and then saying, “Okay we’ve got art now, let’s move on to landscaping.”

He also noted a key economic flaw common to most museums: considering that the institutions generate only a minimal amount of income from their corporate events, cafés and gift shops, the cost of showing art is extraordinarily high. “None of them come anywhere close to covering their operating costs,” says Hill. “Buildings are not that expensive to build, but they are really hard to finance once you get them up.”

Hill began to develop a new fiscal model for the cohabitation of art and commerce, one where leased commercial space would pay for the operating costs of a gallery housed in the same building. To execute this plan, in 1998, he purchased land on Ninth Avenue in Inglewood, a neighbourhood in Calgary’s east end about 15 minutes walk from the city’s centre. Although for years the district has been known for its unique shops and restaurants, hardly anyone worked there because it was filled with derelict warehouses, while peddling and prostitution discouraged shop owners and residents from moving in. The area “walked a fine line between being hip and eclectic and seedy and dangerous,” says Hill, whose idea for his art foundation included bringing 500 office workers—creative professionals, like architects and advertising companies—to the building where it would be housed. These tenants would occupy the floors beneath his gallery’s space and become a catalyst for Inglewood to move in another direction.

Hill wasn’t motivated to put up a commercial building for the sake of earning rents. His intention was to create an environment in which art and commerce had a symbiotic relationship, where art could fundamentally improve everyday life. Hill points to the stairway in the lobby of the Art Block as an example of what he set out to accomplish. Initially its design was going to be steps, a slate wall and a waterfall tripping down, collecting in a pond beneath the landing. Unimpressed by the prosaicness of such a structure, Hill contacted sculptor Gord Ferguson and painter Chris Cran. Collectively they came up with a plan to make the stairway itself a sculpture. “It’s commerce and function,” says Hill, “as well as art.”

In 2007, Hill started construction on the Esker (between obtaining permits and building, the structure was three years in the making). He decided to name his gallery after the geological form created during the ice age, when streams under glaciers left long, narrow ridges of gravel and sand deposits. These inverted prehistoric riverbeds are a metaphor for his foundation’s objective to bring art to a wide group: they act as the link between generations past and future.

In June 2012, just weeks before the Esker’s opening, Hill hired Naomi Potter—previously a curator at Walter Phillips Gallery, where she worked under Kitty Scott—as its artistic director. The posting for the job asked for a two-year exhibition plan. Instead of offering Hill a proposal for shows, however, she sent him 10 critical objectives—including audience engagement, environmental impact and public programming—that she believed were key for museums and galleries of the future. Hill was struck by her vision. Today the Esker has six full-time employees, including fellow curator Shauna Thompson.

Unlike most of the country’s other institutions spawned by an individual’s interest (Toronto’s Bata Shoe Museum and Vancouver’s Rennie Collection, for example) there are no plans for Hill’s art to appear on the Esker’s walls any time soon, nor will the foundation develop a permanent collection. Instead, the Esker will continue as it has started, to program three seasons per year—a combination of original exhibitions developed by the foundation and shows brought in from outside galleries. “Collecting institutions are long on art and short on space,” says Hill. “We have no collections, so we are long on space and short on content. It’s a natural fit.”

This approach, Hill believes, will also allow the Esker to be open to a broad range of art. “Everyone is saying to us: What is your mandate?” says Potter. “My response is: Why do we have to narrow things down? Why do we have to say it’s going to be contemporary, or it’s going to be Western Canada art?” For Potter, the challenge is to look around and ask, Who has not been shown in Calgary? What is happening in the rest of the country that should be shown here? Her vision is in sync with Hill and his notion that “the only limiting factor at the Esker is our imagination and drive.”

Just as Hill envisioned a new economic model for his gallery’s sustainability, so too did he decide that the Esker should have a distinct approach to programming. Since the foundation does not have a board, Potter has more flexibility in programming than the publicly funded world, where schedules have to be set many years in advance. “Jim and I sit down, discuss ideas and think about what’s relevant to what we want to do and support,” she explains. “The Esker has this incredible gift, which is funding, and that allows us to be a little bit more experimental, and to have the opportunity to turn on a dime—to plug in an exhibition at the last minute. It enables us to be more fast-moving and responsive.”

This has meant bringing in exhibitions like last fall’s “Fiction/Non-fiction” (curated by Wayne Baerwaldt, Steven Loft and Potter, and co-produced with the Illingworth Kerr Gallery at the Alberta College of Art and Design), a show of work by 13 contemporary artists that challenged historic cultural and political narratives. It has also afforded Potter an opportunity to commission works from artists, including one by David Hoffos, who created an installation for one of the building’s ground-level windows on Ninth Avenue Southeast.

“Most curators expect to spend the lion’s share of their time going down a path of developing budgets and grant writing,” says Hill. “When you reorient them and say it’s all about the programming, it’s remarkable how productive they can be.” Potter agrees with this last point. When the Esker opened, she explains, people were asking, “Could this place properly display art? Would people take it seriously since it wasn’t a public institution?” Now, no one asks these questions. “In the past, artists have been raised here, trained here and then they have left,” says Potter. “Now people are coming down to the Esker to see art that they have never seen. It’s connecting them to the world and to Alberta. People are now saying, ‘Forget about whether it’s public or private.’ There’s a venue where people can see art in this town.”