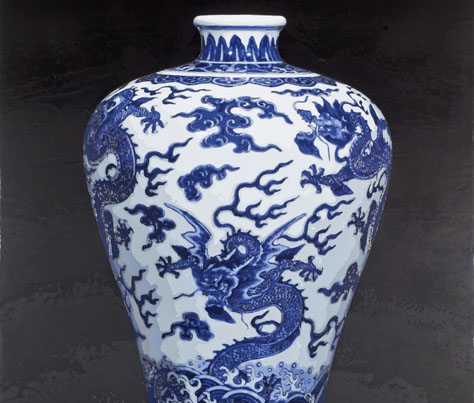 Each of FitzGerald’s paintings starts with a source photograph, which the artist modifies in Illustrator or Photoshop. He transforms that image into a black-and-white sketch that he prints on acetate, which he then uses as a blueprint for the canvas. From there, FitzGerald uses caulking (a waterproof filler) to map out the major lines of his composition, then pours acrylic paint from squeezable bottles onto his work. “The technique is excessive,” he says. “I use a lot of paint and the only time I use a brush is if I make a colossal mistake and have to patch an area.”

ON HIS ROLE AS A PAINTER

FitzGerald sees himself as a contemporary court painter, documenting—and critiquing—the material excesses of contemporary culture. “If painting is what I’m going to be doing for a living, then I should express my politics through it,” he says.

FitzGerald, who stands a hulking six-foot-two, makes paintings that match his physique. One of his largest works, The Hacker-Pschorr Beerhall, Oktoberfest, Munich (2005), which measures 12 feet wide by 18 feet high, took him more than three years to complete. Because his paintings are so large, FitzGerald places his canvases on the floor and applies paint with a scaffolding-like contraption that allows him to position himself over them.

The above painting, Lot. No. 5235—Blue and White Porcelain Meiping, Quianlong Mark, Late Qing/Republic Period, is of a vase that Bonhams Fine Art Auctioneers and Valuers put up for sale for approximately US$9,400. Although the auction house had reservations about the object’s authenticity, two anonymous telephone bidders, both based in China, wanted the item so much that they drove up its selling price to $7.63 million. FitzGerald explains that the idea of cultural repatriation, “getting back all these objects that had been looted,” became more important than where the items came from. He painted the vase as a symbol of material desire, art speculation and the question of what is real and what is fake. 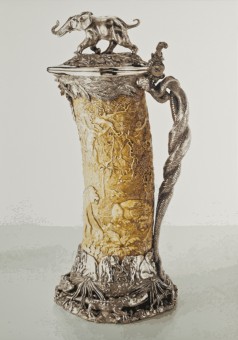 Tiffany & Co. Elephant Tusk Tankard; Silver and Ivory, 1900 depicts a decorative mug made by the famous jeweller for the Paris Exposition Universelle in 1900. The American luxury manufacturer was trying to compete with European rivals including Fabergé and Lalique. The body of the 28-inch-tall tankard, made by the renowned jewellery designer Paulding Farnham, consists of a hollowed-out section of an elephant tusk covered in jungle scenes, modelled in silver. FitzGerald calls the turn-of-the-century work “over the top, insensitive and a show-off piece that’s still compelling because of what it says about displays of excess.” 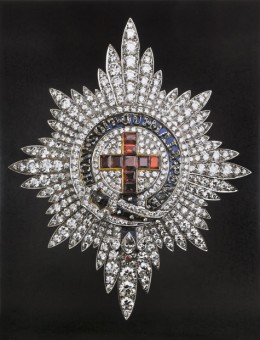 The Most Noble Order of the Garter is a painting of a Garter Star, a brooch worn by members of the world’s oldest and most prestigious royal organization. England’s King Edward III founded the exclusive order in 1348 after he attended a dance at which crowds snickered at a lady whose garter had fallen off. FitzGerald explains: “He knelt down, put the garter on his own leg and said, ‘Honi soit qui mal y pense’ [‘Shame on him who thinks ill of it’].” In most formal portraits, the Queen wears the order prominently, pinned to the left side of her chest.